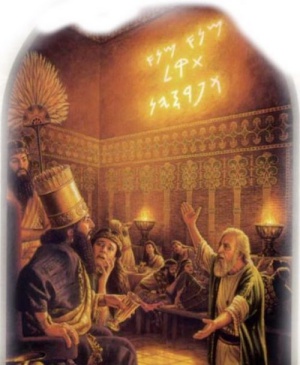 The writing is on the wall. The world now stands at the brink of a great war; no doubt a global war, a war that will undoubtedly far surpass the horrors and hardships wrought by the 20th century’s two bloody world wars. The war now developing will most assuredly be the most tumultuous calamity ever experienced by any generation – it will overturn civilization itself.
But how may we know for certain what the future holds in this regard? Surely the leaders of the nations would not be so stupid as to risk the extermination of all mankind? The truth is, there are influential evil entities involved that are much more powerful than humans. To underscore that fact, while people are generally familiar with the term Armageddon – there even being a popular Hollywood science fiction movie by that title – most do not appreciate what Revelation says brings about the conflict known as the war at Armageddon. But according to the 16th chapter of Revelation it is expressions inspired by powerful, super-human evil spirits —demons —that are destined to influence the world leaders, over-reaching them, gathering them to a symbolic place, a situation really, called in Hebrew Harmageddon. Other books in the Bible confirm that same eventuality. For example, Revelation informs us that after their crushing defeat at Armageddon Christ will imprison the demons for a thousand years, while Isaiah foretells the same thing in the 24th chapter, saying: “In that day Jehovah will turn his attention to the army of the heights above and to the kings of the earth upon the earth. And they will be gathered together like prisoners gathered into a pit, and they will be shut up in the dungeon; after many days they will be given attention.” It is apparent that the “army of the heights above” is in reference to the legions of demons under Satan’s command. Their being taken as prisoners and shut up in a dungeon for many days is in harmony with Revelation. As regards the future, we may know the future because the future has already been determined, long ago, by someone far wiser and more farsighted than any mere human or demon. God not only foresees and determines the future, but he has also revealed the things to come in prophecy. The book of Daniel, written five centuries before Jesus came to the earth, consists of a series of visions and dreams that God inspired, as well as direct messages to the prophet from divine messengers, that reveal the historical developments and the behind-the-scenes goings-on that will soon culminate with the climatic coming to power of the Kingdom of Christ and the catastrophic end of all human governments. But the coming global war will merely be the final battle in an earthly conflict that has spanned more than two millennia. The prophecy in the 11th chapter of Daniel identifies two opposed kings or kingdoms – the king of the north and the king of the south. Over the span of twenty-four centuries the dominant power has shifted from one to the other. First the kings of the south dominated, then the kings of the north and back and forth – until the crucial period delineated in prophecy as “the time of the end.” Contrary to what the Watchtower has stated, during the time of the end the king of the north will subjugate his longtime nemesis and reign supreme – establishing a unipolar world government – the first ever truly global government. That is why there is no mention of the king of the south when Michael stands up against the king of the north. The book of Revelation, which is intertwined with the prophecy of Daniel, reveals that this last kingdom will only rule the world for a symbolic one hour, in other words – for a relatively short period of time. Both Daniel and Revelation reveal the short period of time to amount to 1,260 days, or three and one half years. The final chapter of the long-running historical saga concludes when Michael, the great prince, otherwise known as the Prince of princes, stands up to confront a fierce-looking king, who is also portrayed as the last manifestation of the king of the north. At which point the last king comes to an inglorious end. These climatic events are in the near future. But who is this fierce king and the king of the north that will come to his end? The truth is, since the publication of the Pay Attention to Daniel commentary in the aftermath of the collapse of the USSR the Watchtower has not had anything to say in revision regarding the prophecies of Daniel. Given the obvious lateness of the hour and the Watchtower’s silence, it behooves thinking Christians to pay all the more attention to Daniel.
Registration
Sign up to be notified when new articles are posted. If you do not want to give your e-mail address, you can use a temporary e-mail address service, as Yopmail, or create a Gmail address reserved for incoming mail from Baruq.
Featured Posts
Let us examine our beliefs: the existence of God