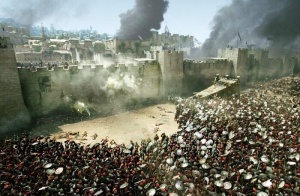 Jesus did not always refer to a generation as being a wicked and adulterous generation. Just as he told his disciples that “this generation will by no means pass away until you see all these things”, Christ also told the Jews and their Pharisees the same thing.
When denouncing Jerusalem as the killer of the prophets in the 23rd chapter of Matthew Jesus said: “Some of them you will kill and execute on stakes, and some of them you will scourge in your synagogues and persecute from city to city, so that there may come upon you all the righteous blood spilled on earth, from the blood of righteous Abel to the blood of Zechariah son of Barachiah, whom you murdered between the sanctuary and the altar. Truly I say to you, all these things will come upon this generation.” There was no ambiguity as to the length of the generation Jesus had in mind. There certainly were not overlapping generations. Surely, the apostles did not need a whiteboard and a pointer to explain what Jesus meant. Very simply, many of the Jews who were living then were still alive when the Roman armies came in 70CE and annihilated Jerusalem.
Registration
Sign up to be notified when new articles are posted. If you do not want to give your e-mail address, you can use a temporary e-mail address service, as Yopmail, or create a Gmail address reserved for incoming mail from Baruq.
Featured Posts
Let us examine our beliefs: the existence of God