Robert King (e-watchman)
Guarded Secrets You Have not Known 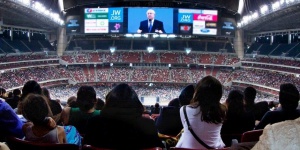 An idol may be defined as any person or thing regarded with blind admiration, adoration, or devotion. That certainly describes the relationship of Jehovah’s Witnesses to the Watchtower. And because of that blind devotion Jehovah’s Witnesses cannot imagine that the Watchtower could be wrong in any significant measure —much less that the leadership could ever betray God and become apostate. And for that reason Jehovah's Witnesses do not feel the need to question anything they are taught. So thorough is the indoctrination, Jehovah's Witnesses will quickly shut down anyone who tries to get them to reason upon the truthfulness of anything the Watchtower teaches.

I experience this all the time —especially with elders. As an example, in the past month I have emailed elders a newsletter on the book of Joel pointing out the implications of the Watchtower’s recent cartoon hinting at the fact that everything the Watchtower has taught for the past seventy years in regards to the identity of the locusts is wrong. Without exception the response has been 100% negative. A large percentage of elders simply unsubscribed to protect themselves from ever being challenged again to think. Others were compelled to contact me personally to denounce me as an apostate. Some even complained to the bulk emailer I was using —requiring me to explain to them why so many objected to being contacted by me. Fortunately, they accepted my explanation that I was contacting church leaders with an important message that they did not want to hear, and so that did not shut down my account.

Besides the obvious hypocrisy of any of Jehovah's Witnesses objecting to receiving an unsolicited Bible-based message, the close-mindedness ensures that Jehovah's Witnesses will be in the dark up until they are overtaken by Christ’s return. It is so written.

A couple of years ago I happened to have a face-to-face encounter with an pioneering elder who sat on the judicial committee that disfellowshipped me. I reminded him that I told the committee back then (2005), that there was going to be another world war. And then I asked the elder if he was keeping up with world events and all the talk of a war with Russia and China? His one-word response —after a long interval of a blank stare —was: “So?”. In his mind another world war simply had no bearing on anything. He couldn’t get the sense of it. After all, the Watchtower has said there cannot be another world war. So, that’s it. It was completely beyond his ability to process the ramifications of nation rising against nation and kingdom against kingdom at any point in the future. The implications of such a thing would call into question everything the Watchtower teaches. That is simply too much for most to bear.

But that is the power of the idol. In the forty-eighth chapter of Isaiah Jehovah explains the phenomenon and how he has purposed to deal with it, saying to his earthly organization:

“I told you long ago. Before it came about, I caused you to hear it, so that you could not say, ‘My idol did this; my carved image and my metal image commanded this.’ You have heard and seen all of this. Will you not declare it? From now on I am announcing new things to you, guarded secrets that you have not known. Only now are they being created, and not long ago, things that you never heard before today, so that you cannot say, ‘Look! I already know them.’ No, you have not heard, you have not known, and in the past your ears were not opened. For I know that you are very treacherous, and you have been called a transgressor from birth.”

Not even the ancient idolators attributed intelligence and speech to the images they worshipped. No, this is no ordinary carved image. It is apparent that Jehovah is speaking of the organization as the idol. Do not Jehovah’s Witnesses refer to the Watchtower as God’s own mouthpiece? As such, everything the organization utters is held to be God’s sacred truth —even though virtually everything the Watchtower has ever published regarding the modern fulfillment of prophecy has been wrong. So, in order to discredit the organizational idol Jehovah has chosen not to open their ears —as the scripture states. And that is why Jehovah’s Witnesses are unable to reason upon what they are taught.

To illustrate, back during the Second World War the Society’s new president, Nathan H. Knorr, gave a public discourse entitled: Peace, Can It Last? The speaker boldly predicted that the defunct League of Nations would come back to life, thus fulfilling the prophecy in the 17th chapter of Revelation regarding the beast rising up from the abyss. And lo and behold, after the war ended the United Nations emerged as the reincarnation of the League —this time with the United States as a member. To this day the Watchtower boasts of their idol’s interpretive prowess.

But just for fun, let’s suppose that you happen upon a Jehovah's Witness who is open to reason. You might ask him if he think it is reasonable that people of the world have already been marked with the 666 mark of the beast. (Remind him that the Watchtower teaches that the marking commenced in

1922 [1] and was renewed in 1945 [2] when the UN came on the scene) Tell him the reason you question it is because everyone who receives the mark is doomed to everlasting death. Their names are not in Jehovah’s book of life. The problem is, if masses of humanity have already been condemned to the second death, what is the point of preaching the good news to them?

No doubt some unreasoning Jehovah's Witnesses will retort that God can pencil their names back into the book of life. But that is just silly, childish reasoning. The Scriptures quite plainly indicate that the 666 is an irrevocable sentence of permanent death.

Of course, once a person begins to reason and they come to the conclusion that it is illogical and frankly, absurd, that anyone has been marked yet —that opens up a whole new mess. The reason being, the oracle on the watch tower is well aware of the fact that the beast emerges from the abyss after the death-stroke upon the head of the beast, which coincides with the coming to power of the Kingdom of Christ and the ouster of the demons from heaven.

Because the leadership of the Watchtower is treacherous, even as Jehovah declares, they being manically compelled to attribute everything to 1914, thereby reducing the powerful parousia of Jesus Christ into sheer nothingness, they realize they have to locate the beast arising from the abyss and the fabrication of the image in the past too. It matters little how absurd or preposterous. The idol has spoken and Jehovah’s Witnesses are thankful to be so well informed.

Ironically, it is because the Watchtower is held high on a pedestal as the infallible mouthpiece of God that many are stumbled; because when it comes to their realization the Watchtower is not what it is purported to be, they feel betrayed by their idol. And because they have no insight into the Scriptures –independent thinking not being allowed –they cannot reconcile the incongruity with God’s purpose.

But the fact is, it is Jehovah’s guarded secret that Christ did not come in 1914 —that the beast did not receive a fatal wound and revive. The all-knowing Watchtower idol, is in fact, clueless. It has no inkling of what is to occur. That is why Jesus said he was coming at an hour you do not think to be it. There is an unveiling. That is what the revelation of Christ is. That is the guarded secret.

The reason Jehovah’s Witnesses are not receptive to reason is because they have been deceived by their talking idol. Only the over-powering presence of Christ —accompanied by the world crashing down around them —will break the idol’s spell.

The original article is on the page: guarded-secrets-not-known
Registration
Sign up to be notified when new articles are posted. If you do not want to give your e-mail address, you can use a temporary e-mail address service, as Yopmail, or create a Gmail address reserved for incoming mail from Baruq.
Featured Posts
Let us examine our beliefs: the existence of God